Recently, a reader pointed out that I misspelled Ely (I spelled it “Eli”) in one of my novels. This was much to my chagrin, as Ely is a town I’ve visited, and remember well. 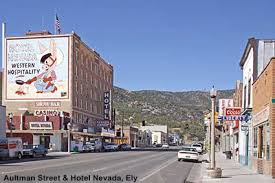 My trip to Ely was back in the days before the Internet, before police agencies had much access to computer technology. This was good news for me, because I had a traffic warrant in Nevada, but I lived in California, and the Nevada Highway Patrol couldn’t connect the dots.

I’d flown to Salt Lake to hook up with the Castles brothers. We were drinking slow Utah 3.2 beers that day, when we decided to drive the three and a half hours to Ely. The reason for the trip, I vaguely recall, was to see a rock ‘n roll band with a drummer the Castles knew.

By sunset we were on the road, five people packed in one of the original SUVs, an 80’s vintage Chevy Blazer. The vehicle’s oversize tires were nearly bald, and the steering was a challenge, especially on the long stretch of Highway 93, which ran south from Wendover, Nevada to Ely. The desert terrain was flat, but the road seemed unnaturally raised at the crest, the pavement sloping down unevenly on either side.

Along for the trip were two women whose sexual exploits were strongly rumored. One was the girlfriend of the drummer. The other was a free agent. Both were holding drugs.

We arrived at the Hotel Nevada in Ely around nine or ten, and the band was there, but I don’t remember seeing them play. I recall a group of local residents, wearing cowboy boots and hats, at the bar. They were unhappy with us for some reason. One of their gals ended up back at our hotel.

Somewhere in the wee hours, one of our gang took off in the Blazer in search of a brothel. He didn’t return until dawn, and claimed to have never found it.

When I woke late the next morning, the single woman from Salt Lake was in the bed next to mine with my buddy. As to the nature or extent of their activities, I can only say that it didn’t wake me, for once the drugs wore off, I’d slept like the dead.

In the brisk light of morning, Ely looked like a place you’d see in a 1950s movie. The low buildings were made of brown brick and the signage along the main drag was from a different era. On the side of the Hotel Nevada was a cartoon caricature of a horse promising “Western Hospitality.” An advertisement for the White Pine Soda Co. was painted on the side of another building, near the Garnet Mercantile store. Down the street, a sign for the Club Rio jutted from a narrow brick building next to the Plaza Hotel Bar sign. Behind the town, a long ridgeline covered in high desert scrub faded into the horizon.

As for my spelling error, I’ve since corrected it, and apologize to any who may have noticed.

Other facts about Ely:

Ely’s boom came in 1906, with the discovery of copper.

Ely is at the far eastern end of the stretch of Highway 50 known as “The Loneliest Road in America.”